Antoinette Hall is an opera house and performance hall built in 1868 and is the oldest surviving opera house in Tennessee. It is wholly owned by a 501c3 corporation, Southern Tennessee Area Arts Repertory (STAAR). The Antoinette Hall Preservation Society, a companion organization to STAAR, was formed for the purpose of raising the funds to stabilize, preserve and restore the opera house.

Restoration of  Antoinette Hall will create a destination space where intimate theatrical performances may be held as well as concerts, opera, dance, speakers, ceremonies and more.

The Education Floor on the street level, where events and theatrical performances are currently hosted by STAAR, will house classrooms for instruction in music/orchestra, vocal/choral, visual arts and dance. It will also feature a modern recording studio, an art gallery and a museum. 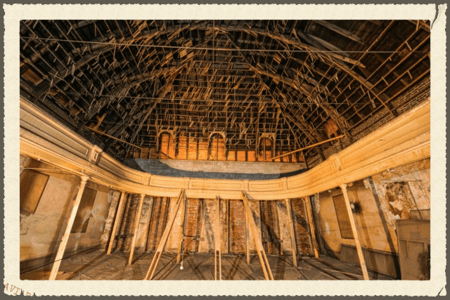 The interior of the historic Antoinette Hall 1868 Opera House, listed in the National Register of Historic Places as part of the Pulaski Courthouse Square Historic District, currently looks like the photo above. When completed it will look like the rendering to the right. 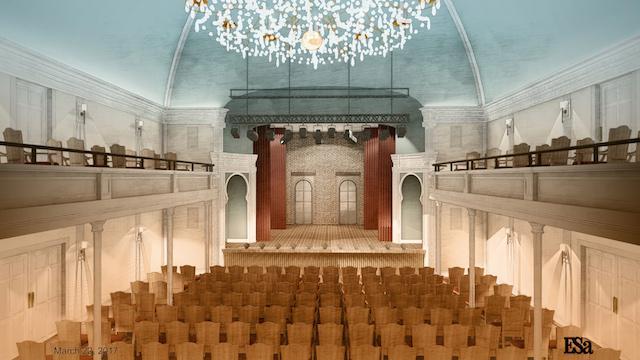 On a cold February afternoon in 2007 the board of directors of a tiny nonprofit community theatre organization, Southern Tennessee Area Arts Repertory (STAAR), in Giles County, Tennessee, visited a potential new “home” in a Victorian-era building located on Pulaski’s historic Courthouse Square.

The street-level former retail space was immense and seemed perfect for the large-cast productions and dedicated audiences that had caught the (negative) attention of the fire marshal in a smaller venue. With pen in hand poised to sign the lease, Tammy Pierchoski, who is now Executive Director of STAAR Theatre at Antoinette Hall, questioned the owner about the exterior appearance of the second floor with its unusual mansard roofline.

The owner suggested the curious entourage take a look, and up an exterior metal staircase they went.

Dark and dusty from decades of neglect, a wide hallway lead to ceiling-high double doors. With illumination from a single flashlight, the determined group pried open the nailed-shut doors only to discover that inside was an abandoned opera house.

“We soon discovered that the once opulent performance hall built in 1868 had been known as Antoinette Hall Opera House,” Pierchoski said. “The community enjoyed plays, traveling entertainers, community events, musical performances and more for several decades.”

When its doors closed in the 1930s at the pinnacle of the Great Depression, its retail inhabitants, who were only concerned about the ground level commercial space, and the community had walked away.

“The spectacular, forgotten opera house needed loving proprietors and grateful theatergoers,” Pierchoski said. “We hoped that would be STAAR.”

The owner agreed that the building could be in no better hands than the board of the all-volunteer STAAR Theatre non-profit.

“He recognized that our group was not only committed to enhancing arts education for the community and bringing local and traveling performances to the stage, we were also willing to accept the challenge of preserving and restoring the Opera House for current and future generations,” Pierchoski said.

The deal was done. Since STAAR leased and eventually purchased the structure, the nonprofit has operated a successful 200-seat theater from its comfortable and accessible street-level facility beneath historic Antoinette Hall. For more than 20 years STAAR Theatre at Antoinette Hall has offered a full calendar of locally produced musicals, dramas and dances. For instance, within a 12-month period STAAR presented more than 50 performances with approximately 600 children ages 3-18 and more than 300 adults on stage as well another 100+ teens and adults directing, assisting, coaching and providing technical service for productions.

“Like in the days of Antoinette Hall’s glory, many entertainers from outside the area come to STAAR to perform, bringing cultural, theatrical and musical events,” Pierchoski said, adding that the community has enjoyed Country music, Rock and Roll, Oldies, Celtic and Gospel music as well as dancers, magicians, comedians and traveling plays.

Additionally, it provides a rental venue for classes, meetings and special events as well as photo and video shoots. The Antoinette Hall Preservation Society, an arm of STAAR, has launched a major fundraising effort to support an extensive stabilization and restoration project. When completed, Antoinette Hall will be transformed into a multipurpose community arts center that will continue to be a home for STAAR.

“The restored facility will be available to arts, musical, theatrical, historic and other types of groups that enhance the region’s cultural life and stimulate the economy of the region,” Pierchoski said. “One hundred percent of all monies donated to the Antoinette Hall Preservation Society or generated from fundraising efforts and productions benefit restoration and adaptive reuse of the oldest surviving Opera House in Tennessee.”

This article by Claudia Johnson appeared in the Summer 2020 issue of In League, the magazine of the League of Historic American Theaters. Read the magazine here.

In the summer of 1868 The Pulaski Citizen printed the following description of the new opera house, which at not yet been named. The reference to “houses’ means the two storefronts what were on the ground level of the building. The “two stairways” refers to the staircases to what would be come Antoinette Hall. They may be seen in old photos as ornate matching entrances with arches and pediments flanking the storefronts. The editor referred to the opera house itself as the “hall.”

“The next two houses are of the same dimensions 80 feet long by 21 feet wide with a vault and bathroom in each and large airy cellar underneath, while two stairways 7 feet 3 inches wide will lead to the magnificent hall in the second story. We have seen a drawing representing the interior of the hall, and we feel no hesitancy in saying that in point of accessibility and easy exit from, in point of convenience of arrangement, elegance of finish, capacity, ventilation and style of architecture, it will have no superior this side of Cincinnati.

The ceiling will be 34 feet high, arched and frescoed in the most modern style, while each end of the building will contain six large windows, and on each end of the roof, three large dormer windows and in the center of the roof a ventilator. The hall will be 41 feet wide by 80 feet in the clear, 20 feet of which will be occupied by a model stage and private boxes. The floor at the rear will be elevated 4 feet to a level with the stage and supplied with settees after the style of those in the Masonic Hall in Nashville.

Capable of seating 500 people exclusive of galleries, the whole building will be fireproof, lit by gas and supplied with water from a large cistern in the rear. Mr. Cox has already had applications from first-class theatre managers for a five-year lease on the hall but has not made any disposition of it.” The idea for Mr. Cox’s proposal hall came about because of an article published [in The Pulaski Citizen] in 1867 entitled “Amusement Wanted.”

The first amusement performed in the hall was on Dec. 25, 1868, at which time a local group, the Ben Johnson Club, with a choice selection of players and a splendid cast of characters, dedicated the new magnificent building. The newspaper observed that “this is perhaps the finest and most tastily arranged theatre in the South as the enterprising proprietor has lavished money and time in its structure and has adorned it with all the beauties and improvements of the age.” 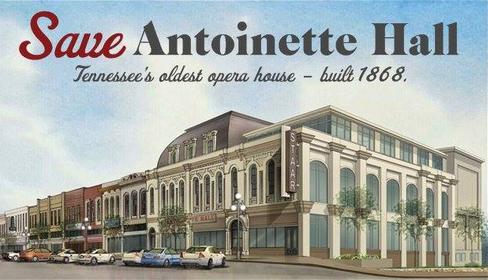 When restored, Antoinette Hall and the STAAR Center for the Arts will bring arts entertainment and education to Pulaski’s historic square.

A legacy of excitement…

The Pulaski Citizen reported extensively on the Opera House in the 19th century. Here are some excerpts from articles that capture the feeling of excitement about the entertainment facility along with a glimpse of the circumstances under which the Opera House was built.

“Pulaski, Tennessee, is to have one of the largest and most magnificent halls this side of Cincinnati,” announced The Pulaski Citizen on June 26, 1868.

The opening of the opera house on December 25 of that same year began an era in Giles County of unprecedented cultural and community growth.

Pulaski, like many towns with a population under 10,000, has a square that is built around a central courthouse. In early 1868, the entire east side of this square was destroyed by fire. Many plans were put forth for rebuilding, but in June of 1868 Angenold Cox announced plans for a magnificent hall to be constructed.

Cox contracted a Nashville architect, M. D. LeMoyne, to render plans for his proposed building, the first to be erected after the fire. The street level floor was to house two merchants with an ornate performance hall to be located in the second story. 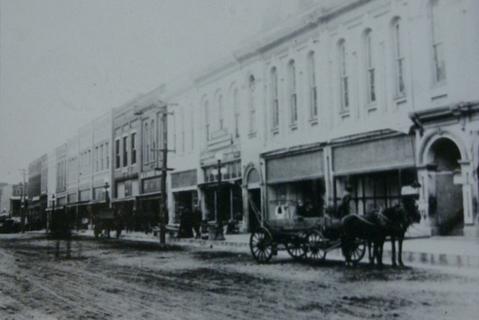 This image appears to have been taken in the late 1800s or early 1900s when the six large windows described in the newspaper were intact. 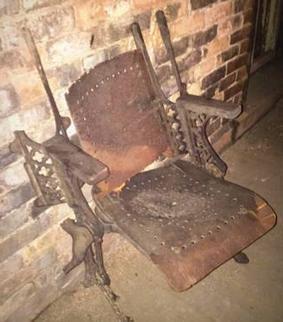 The newspaper stated that the new hall would have “settees after the style of those in the Masonic Hall in Nashville.” This photo is one of what would have been a row of seats forming a settee. The comfortable cloth padding in the center of the seat and on the backrest have long ago deteriorated away. The seat was found underneath the stage in Antoinette Hall.

Thanks to their kind donation of time and expertise, Bob Henderson, Todd O’Neil and Middle Tennessee State University, created this 3D virtual tour video of Antoinette Hall as it appears today awaiting restoration. The video provides a 360-degree view both horizontally and vertically. 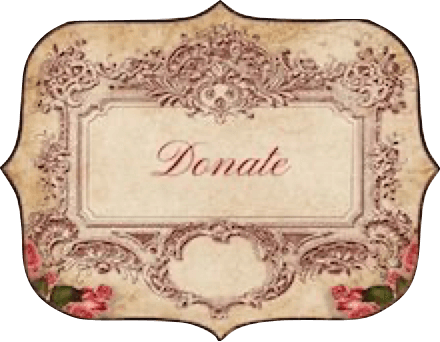