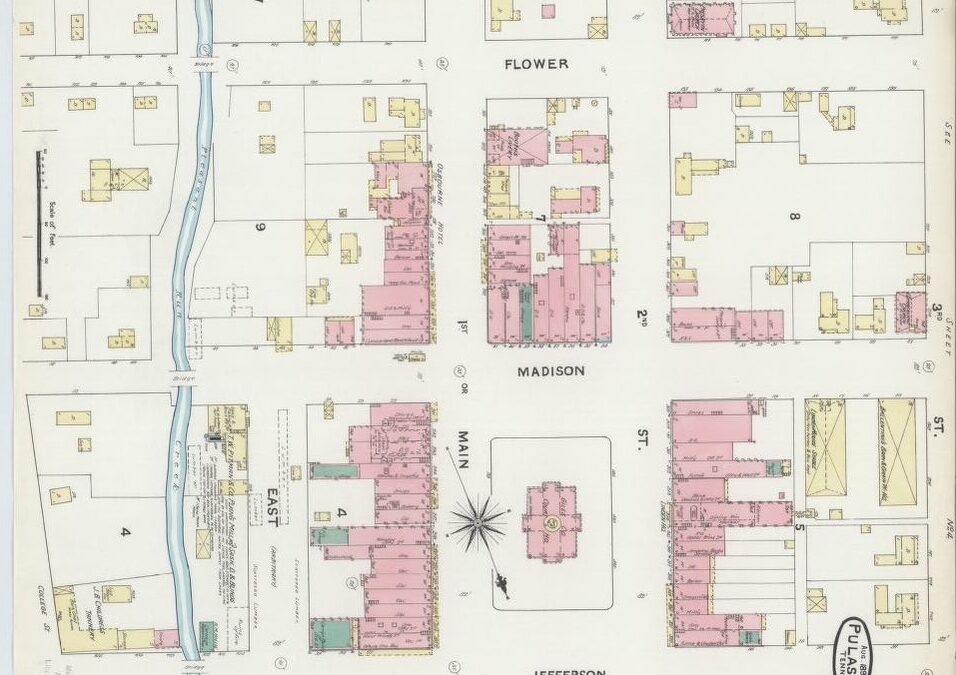 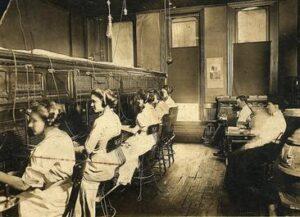 New location when the telephone office moved from Antoinette Hall.

The first telephone service in Pulaski was over a toll line from Nashville in 1884. This line was constructed by the Cumberland Telephone and Telegraph Company, which had been organized in 1883 with the general office in Nashville. In 1885 the company sent E. T. Baker to Pulaski to make arrangements with the city board to install a switchboard and set up the poles. 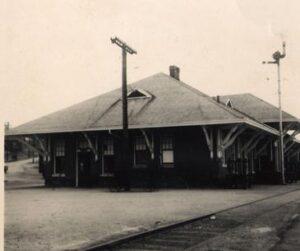 The Pulaski Depot, which was demolished in the 1970s.

With the approval of the board the work started right away and the exchange was completed in a few months. Mr. P. Cooney was the first manager here and the office was located on the second floor of the office annex adjacent to and south of Antoinette Hall, as shown on the Sanborn maps of 1888 and 1891 (pictured above).

The first three telephones were installed in the hotel, the depot and Rainey’s Livery Stable. Floyd Reed was the first operator and he taught Eugene Lewis who was just a boy at the time. When J. W. Dyer took over the office of manager in September 1885 there were 22 telephones in the town, all in business houses. The home of George T. Riddle was the first residence to boast of a telephone, and that was news big enough to rate a notice in the The Pulaski Citizen. Soon others began to take advantage of this new device and the company began to employ young ladies as operators.

These operators were called “Hello, Girls” and addressed as “Central.” A popular sob song of the day was “HeIlo, Central, Give Me Heaven, For My Mother Is Up There.” The young bachelors Pulaski had the habit of calling the operator and quoting this song, expecting her to connect them with their best girl.

The second location of the exchange was in a building about a block off the square on South First Street, where it can be seen designated on the Sanborn insurance map of 1895. With subscribers rapidly increasing, The Pulaski Citizen ran a column called “Telephone Talk” with news of new subscribers and happenings at the Central Office.

In 1901 the office moved to the second story of the building on the southeast corner of the intersection of First and Madison streets and had 259 subscribers. By 1904 this number had increased 400. The switchboard was enlarged and more operators were added. Advertisements in The Citizen promoted the transfer of money by long distance telephone.

The office was located in the same building to which it had moved in 1901 until 1936. The Cumberland Company merged with the Southern Bell and Telegraph Company in 1926. In 1934 the discussion of the flash system was started, and the city board passed a resolution favoring the new system. The company purchased a site on the corner of South Second Street, a block off the square and started construction of a new building. By August 1936 the new building, switchboard and all necessary equipment for the flash system was ready for use. A few months later the newspaper reported extensively on the open house for citizens to tour the new building and see the flash system in operation.

By 1940 there were 908 subscribers listed in the directory. This number increased so rapidly in the next few years that it became necessary to enlarge the building and add more operators. In 1948 there were 2,061 telephones in the county. At the beginning of 1950 there were two managers, 27 operators, seven linesmen and two ladies in the business office, and the list of subscribers including the exchanges in the county numbered 2,358.