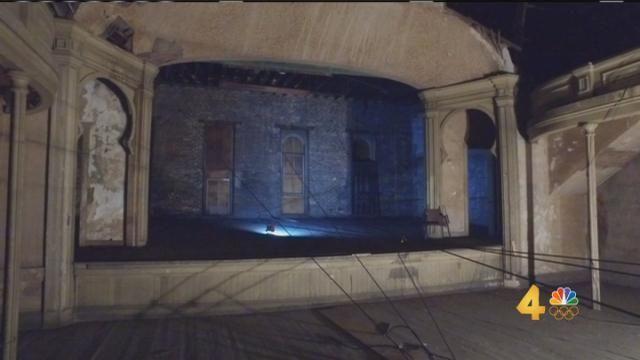 In one Middle Tennessee town, at one very old place, there’s special meaning to the words “stage fright.”

“It’s sheer adrenaline,” said Tammy Pierchoski. “It really, truly is. The sheer terror. It’s heart stopping, the feeling you have before that curtain goes up on opening night.”

At her STAAR Theatre Center for the Arts in Pulaski, Pierchoski can see a certain passion in actors that makes them belong under stage lights.

“You can tell right away,” she smiled. “You get that feedback from the audience. You can make them laugh or make them cry. It is very magical, and it does make you want to do it more.”

Pierchoski said sometimes actors are so drawn to the stage, they never leave.

Upstairs from where she rehearses is Antoinette Hall.

“When it opened in Giles County on Christmas Eve, 1868, it was Vaudeville shows,” she said.

For decades, there were piano players, singers, illusionists, ventriloquists, all people born to entertain.

“When it closed in the 1930s, they pretty much closed the doors and walked away,” Pierchoski said. “There’s not another event that’s happened in this space.”

She doesn’t believe Antoinette Hall was ever truly left behind.

“I brought a tour group up once, and we were up here by the stage,” Pierchoski remembered. “One of the folks that was on the tour said, ‘I wonder what’s underneath that stage?’ I said, ‘The bodies of bad actors, of course.’ The fire door went shut. It would not open. We had a little panic moment. I called my husband, and he opened the door easily from the outside. Those kids about mowed him over exiting.”

Pierchoski said strange things continued, like what began on a late night while she was downtown. She said she heard something coming from Antoinette Hall.

“It got louder and louder,” she remembered. “It was a tapping sound, and it was rhythmic. I came upstairs, came through the doors, and it was silent. So, I go back downstairs. I go back to my work. Couple minutes later, it starts up again.”

Pierchoski’s come to believe it was the ghost of someone who used to dance on this stage, not wanting to leave a place where he felt he belonged.

On a Halloween tour, Pierchoski had living actors on the Antoinette Hall stage for the first time in nearly 90 years. Her STAAR Theatre non-profit is seeking donations to bring this place to its former luster, to have live theater here again.

As for those performers of a time gone by, Pierchoski said in this place, on this stage, there’s room for everyone.

“They want to stay, so they’re welcome,” she said. “At some hundred years in the future, maybe we’ll still be here.”