After the Civil War, commercial lyceum bureaus were founded; among them was the Redpath Lyceum Bureau of James C. Redpath in 1868. In 1901, Keith Vawter purchased a one-third interest in the Redpath Lyceum Bureau and became the Redpath booking agent in Chicago, later moving his headquarters and operations to Cedar Rapids, Iowa. In the summer of 1904, Vawter launched the first Chautauqua circuit with the assistance of Charles Horner.

The Redpath Lyceum Bureau had offices in other American cities. Another Iowan and former Vawter employee, Harry P. Harrison, ran the Chicago office.Under the name “Redpath-Chicago,” Harrison launched a major Chautauqua circuit in 1912. His territory was Illinois, Indiana, Ohio, Michigan, Kentucky, Tennessee and the Gulf States. Pulaski was on this circuit, and many events were staged at Antoinette Hall.

Circuit or tent Chautauqua began to expand and became an even greater influence about 1913, but World War I interrupted the circuits somewhat. In the years after the War (1920-1924), Chautauqua reached its peak of attendance. In 1920 there were twenty-one companies operating ninety-three circuits in the United States and Canada. The Great Depression brought an end to the circuits. The final circuit folded its tents in 1932 and the splendor of tent Chautauqua was over.

The “Redpath Chautauqua Special” train (above) was photographed at the Pulaski, Tenn., Depot during the 1910s: University of Iowa. Libraries. Special Collections Dept.

The Chautauqua’s banners were strung around the Courthouse square in this photo taken after 1910. Antoinette Hall hosted a variety of the Chautauqua’s performances over the years. 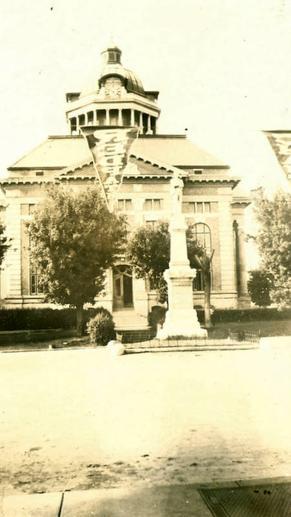