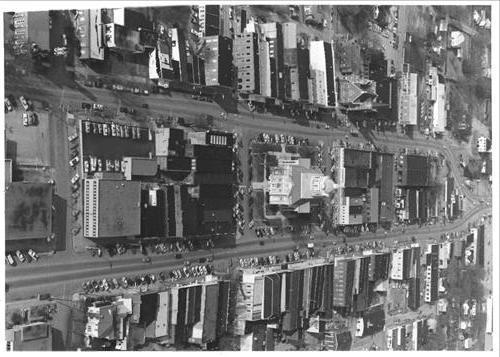 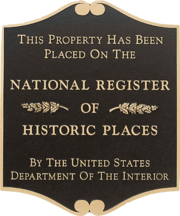 Antoinette Hall is a contributing structure to the Pulaski Courthouse District in the National Register of Historic Places as designated by the U.S. Department of the Interior. This does not mean that Antoinette Hall or any of the buildings on the square receive federal or state funding. It means that the buildings are protected from being destroyed or altered as the result of a federally-funded project.

To download the full nomination, including the survey of all buildings, which was accepted for the National Register district, click here. The narrative portion of the nomination is reprinted below. The photo at the top of this pages shows the district as it appeared when the nomination was submitted in 1983. It is easy to distinguish the Mansard roofline of Antoinette Hall, which was all but forgotten at that time.

The Pulaski Courthouse Square Historic District is comprised of 92 buildings in a nine block area around the 1909 Giles County Courthouse, These buildings are primarily commercial, date from the 1860’s to 1930’s and exhibit in their facade detailing a variety of architectural influences, from the Italianate to the Art Deco styles. Of brick construction, the buildings range from one to three stories with the majority being two stories in height, the upper stories of the commercial buildings retain a high degree of integrity with most of their architectural embellishments intact.

The first-story storefronts of many buildings, however, have been altered extensively, eighteen buildings do not contribute to the historical character of the district because they have been altered to the point that their architectural integrity is lost or they are relatively new, undistinguished buildings, Pulaski’s town plan dates from an 1809 state enactment, following an 1806 cession of Indian lands when several towns in southern Tennessee had their beginnings. The state act establishing Giles County appointed five commissioners to select a site for the county seat and to divide it up for auction. The two site requirements were that the town must be on Rich!and Creek and it must be near the center of the county.

Occupying the center of the square first was an 1811 log courthouse. This courthouse burned after two years and was replaced by a two-story brick structure built by Archibald Alexander, which was used-until the 1850s, The next courthouse, built in 1856, was said to be the “finest in the state,” but it soon burned because of a faulty flue. Its 1859 replacement was designed by Heiman and was a two-story brick building with a cupola and bell. This courthouse lasted for almost 50 years until 1907 when it was destroyed by a fire.

The present Beaux Arts building was designed by Benjamin N. Smith of Montgomery, Alabama, and constructed by George Moore and Sons of Nashville. The current courthouse was finished in 1909 at a cost of $135,000 with furnishings, Pulaski’s town plan is laid in a grid pattern with the courthouse situated centrally in the town square. This arrangement,termed a block central courthouse square, has four streets which enclose the central courthouse and divide nine blocks into a grid shape with parallel First and Second Streets running north-south, intersected by parallel Madison and Jefferson Streets. The relative simplicity of the buildings facing the square act as an excellent backdrop to the elaborateness of the courthouse. These rows of two or three-story, flat-roofed brick commercial buildings exhibit the changes in architectural style from the 1860s to the 1930s.

A number of buildings incorporate round-arched windows with decorative corbeling and bracketed cornices. Due to the establishment of leading businesses and the county court on the square, Pulaski became the largest town and trade center in Giles County, Pulaski’s square continues to thrive and serve a variety of functions and social needs, as shown in its buildings.

The Pulaski Courthouse Square Historic District is being nominated under National Register criteria A and C far its importance in the architectural, governmental and, commercial development of Pulaski and Giles County. As a collection, the buildings of the district represent the best examples of late-nineteenth and early-twentiethcentury commercial architecture in Pulaski and Giles County. The district is architecturally among the finest courthouse squares remaining in Middle Tennessee, Established on Rich!and Creek, Pulaski prospered throughout the early nineteenth century as the most important social, governmental, and business center in agrarian Giles County.

During the Civil War, Pulaski was the site of the hanging of Sam Davis, the young Confederate hero, Following the war, the Ku Klux Klan was formed in a small commercial building still standing within the boundaries of the district. In the late 1860s after several fires, the current architectural character of the court square district began to take shape with brick buildings replacing wooden ones. By the turn of the century, Pulaski had a population of about 4,000. There were a number of important industries, and the town was showing a steady growth. In 1915, six years after the current courthouse was completed, the town government ordered all trees around the square to be cut down and all poles removed to make way for new paving and curbing.

Twenty electric light standards were installed around the square, and the business men subscribed to a fund for the installation. However, it was not until 1923 that the streets around the square were finally paved after considerable public pressure. The appearance of the district has not changed significantly from that period. It is still dominated at its center by the Giles County Courthouse, one of the state’s finest Beaux Arts buildings and one which has undergone almost no alterations from its date of construction.

Although the first-story facades of many commercial buildings within the district have been altered, the majority of upper stories retain a high degree of their original architectural integrity. Facing the northwest corner of the square is the First United Methodist Church, which is the largest and best example of Victorian Gothic architecture in Pulaski and Giles County.