Dreams, History and the Other Woman 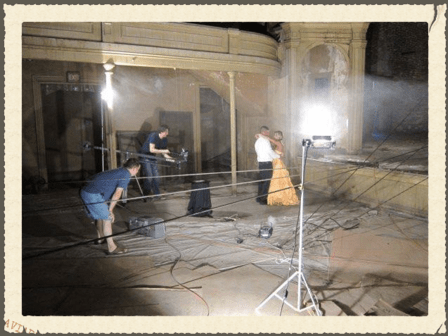 by Dr. Trisha Petty (her first encounter with Antoinette Hall in 2013)

I have this recurring dream. No- not the one that takes me back to high school, where I am naked, walking down the halls, looking for my locker. That, is not a dream, it’s a nightmare.

This dream I have is in the old house that stood next to mine in Aurora Illinois when I was kid. It was an old house built in 1890 and the jewel of the neighborhood. I visited Mrs. Kranz about once a week. She was at least 135 years old, smelled funny and was always making boiled cabbage. But she taught me how to can, how to plant a vegetable garden while at the same time telling me stories of when she was a young girl.

I sat in her kitchen with the white enamel table trimmed in red while we worked. Only once did I go to another part of the house. The main hall had a staircase and three doors that led to the other rooms and a large front door. My recurring dream is going though one of these doors or up the stairs to find a room that had been unknown up to my discovery. The room is always filled with boxes, trunks or just piles of stuff. I am excited to begin the process of going through everything, and then, of course, I wake up.

Presidents Day, Col. Charlie and I went to Pulaski to meet with publisher of the Tennessee Free Press and owner of Capital City Geeks, Jeff Phelps. Publisher Jeff is an amazing man, he not only runs two businesses he is married, home schools his son and keeps up with all my stuff- which is why he is pretty amazing to me. He wanted to introduce us to Tammy Pierchoski. She, along with her Board of Directors runs the STAAR Theater on the square in downtown Pulaski, Tennessee.

I was expecting the ‘artsy’ type. All natural cotton gossamer clothing, wild dangling earrings, 5 or 6 rings on her fingers, perhaps a toe ring or two and a necklace of either puka shells or river stones. The person that came to the table at Legends, however, was a polished, petite, beautiful and refined woman with a quick smile and sparking brown eyes. I made sure Col. Charlie stayed by my side at all times!

We began just getting to know each other. She was an instructor at a dance studio for a time. Of course, I had to ask her about Abby Lee Dance Studio and “Dance Moms” which I DVR every week. She told me that it was truly like that working with moms and kids at high competition studios. That Abby Lee had to treat the dancers like that to make them professionals. Tammy’s dance studio wasn’t run like Abby Lee’s. I just couldn’t think that Tammy could even raise her voice in anger, she was so dainty. Dance Moms is also a reality show that adds MUCH drama!

Tammy is also a talk show host on Channel 3 in Pulaski, is married to a criminal defense attorney, Stan Pierchoski, whose office is right next door to the theater. Tammy’s daughter works in the theater in one way or another in New York or ready to begin their career.  One son enjoyed the technical area of theatre and the other more interested in film.  Tammy showed me their pictures, they are all as beautiful as she is and her sons are as handsome as their dad, Attorney Stan.

The building she took me to later that afternoon (about 4 hours after we met- I bet the waitress at Legends was very happy to see us go) was built in 1868. The STAAR Theater does a play about every six weeks and is on the street level. As she gave us the tour of the 200 seat theater, I was surprised how large the back of the house is. Rooms, nooks, wide spaces have been carved out for a ‘green room’ where actors can sit before their scenes, a makeup area, a children’s room where little ones are kept under a watchful eye while waiting to go on stage. There is a room with costumes for the current play, a larger room with past performance costumes all hung neatly with shoes and hats nearby.  There is even a larger area with boxes of unpacked costumes waiting for unpacking.

And if that wasn’t enough, Tammy Pierchoski told me a story of the room upstairs. Through circumstances when the theater was purchased she decided to go up to the attic and see what was there.  What she found was a whole second story which the previous owner didn’t know existed until they took a trip up the stairs before the paperwork was signed for the lease.

As she walked down the hallway she found offices some with the doors intact. Doors complete with original porcelain door knobs and glass were found to have names of  an insurance company and an attorney’s office.  At the end of the hall she found two double doors and a huge metal firewall door. Opening that last door she found her secret room.

A full blown opera house with stage, domed ceiling, intricate woodwork and even a balcony had been hidden and lost for almost 70 years behind those doors. Tammy was living my dream!

The room having been inactive, had dust and dirt, all over. The varnish on the floors was peeling, the ceiling, having had some damage in a fire years before, was mostly gone. There were large metal cables crisscrossing the room holding the front and back walls from falling outward any further.

Soon I felt like I was watching the Titanic when James Cameron took the cameras below water to the wreck. Rose began a voice over as she told her story. The memory of the fantastic ship came to life on film. I had that feeling as I stood dumbstruck in the room as TV Tammy talked to Col. Charlie and Publisher Jeff.

I could easily see the potential of restoration of the grand room. Sure, opera would be nice- I think- as I have never been to one- nor have had a desire to go to one- but I would try a good German opera if I could sit in a grand space as this was.

I would love to hear a classical concert or a stringed quartet, a musicale from the students at Columbia State or Martin Methodist College. A jazz band, or Buck Sixx,  a birthday party or an anniversary party. How about a dance? I could see the UDC or DAR giving a tea in grand style in that room. I see dinner theater or special speakers or other fund raisers. Tammy and her board members are owners of the last standing opera house in the South. (it’s a 501(c)(3)-nonprofit status….not privately owned.)They have put on the table a 10-year plan is to restore it. Something precious, that can be used for all Middle Tennessee citizens, which brings a lot of money into Pulaski on performance nights will be such an asset to this small town.

As Tammy and I spoke bouncing ideas for fundraisers, I thought about why we moved to Tennessee. I love my ‘little’ town of Columbia. I love downtown Pulaski. My landlord lives around the corner and up the hill from the STAAR Theater. He owns several downtown shops on the square. I love to come to visit Landlord Leonard because Col. Charlie always buys me a nickel Coke at Reeve’s Drug Store.  The Clothes Pin has adorable clothes for children but wonderful things for grownups- like my keychain and polka-dot notebook with matching coffee cup (thank you Landlord Cathy).

I want people to come to Middle Tennessee to visit the STARR Theater, have a nickel Coke, come to the Maury County Fair. Have a wonderful time learning about Sam Davis, James Polk, Rippavilla, Rattle and Snap and the Mars Farm. I never want to lose my small town feeling I have adopted as my own. But I do want to share it with the world. Will you help TV Tammy with her project to restore the Opera House to its glory? You can send your tax deductible donation to: STARR Theater and Antoinette Hall, 105 N. First Street, Pulaski, TN 38478

Or drop in for one of the performances. You just may see me, Col Charlie and Publisher Jeff attending that night. But if you see me with a faraway look in my eye, perhaps a tear- it’s really ok, I am just jealous because another woman, who is now my friend, opened a door and found a treasure. I still have my dream. However, now I have the honor to help TV Tammy with hers.

The above photo was taken during a music video shoot.