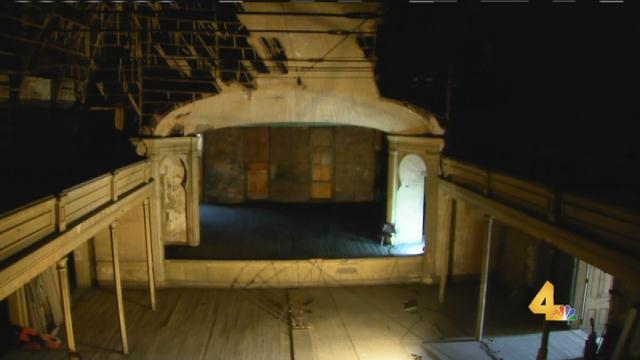 PULASKI, TN (WSMV) – For 10 years a non-profit theater in Giles County has owned a true time capsule of Tennessee history.

Now members say the time has arrived to bring it back to its former luster.

“So, we were this theatre group looking for a home,” said Tammy Pierchoski, unlocking an old wooden door while thinking back to a day 10 years ago. “My friend says, ‘We’ve got this old building we bought in foreclosure. Maybe you’d be interested.'”

When so much of downtown Pulaski gives that feel of the 1950s, Pierchoski has something a whole lot older.

“We opened these doors, and we had a flashlight,” she said, walking into a huge performance hall. “This is what we stepped into. I sat down on the floor and immediately started crying.”

For the 10 years since Pierchoski’s run the STAAR Theatre and Center for the Arts in a space on the first floor. The second floor is home to the former Antoinette Hall.

Pierchoski said it was an opera house opened in 1868 to lift the spirits of people following the Civil War and a fire that devastated downtown Pulaski.

“This was horse and buggy days,” she said. “This is when it was dirt streets. When you walk into a piece of history like this, it’s like you can feel the energy from that time. You can imagine the woman in their dresses and men dressed up and coming out for an evening on the town.

“These were the porcelain fixtures that were here, but of course, at one time they were gas globes.”

With the final curtain call in the 1930s, there haven’t been any more shows at Antoinette Hall for nearly 90 years. Pierchoski said it’s time for that to change.

“I brought this Girl Scout troop up and one little girl said, ‘Miss Tammy, it looks like Noah’s Ark upside down,'” she laughed, looking up at the exposed wood in the ceiling.

Despite holes in the roof and damage from leaks, Pierchoski is talking with architects and contractors about stabilizing and restoring Antoinette Hall.

Looking at the names of actors sketched into the wood and peeling wallpaper showing the place’s many eras, Pierchoski said this is her new passion. She wants to take that place that’s overlooked Pulaski so long and put performances back on the stage.

“The sad part is, it’s kinda been a secret,” she said. “People don’t know that it’s here, and that’s the point. Wake folks up and let them know it needs to be saved.”

Pierchoski said they’re waiting on a final study from a feasibility report before they start a funding push. Tammy Pierchoski, executive director of Antoinette Hall in Pulaski, hopes to restore the theater to its former glory. |  WSMV